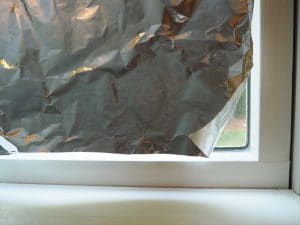 Putting aluminum foil over windows is a quick and easy way to blackout your windows that has been practiced for decades. Not only that but this method is quite popular as well.

However, given that this method looks quite peculiar, naturally, you might wonder if it’s safe to put aluminum foil over windows.

Although your windows might look odd to some, putting aluminum foil over your windows is highly unlikely to damage you, your house, or the environment.

There are a host of different reasons why people might think that the material could be damaging but there aren’t really any viable reasons to be concerned for your safety. However, even so, there are a few reasons why you might not want to put aluminum foil on your windows to begin with.

But first, why do people even do this in the first place? 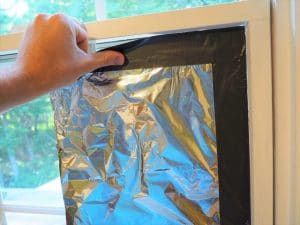 If you have ever driven by a house with windows covered in tin foil, you might first question why someone would do such a thing even before questioning if it’s hazardous or not.

Blacking out your room

Using aluminum foil to on your windows is one of the most tried and true methods for keeping rooms pitch black even during the day.

Using blackout curtains or blackout window film are also common ways to darken rooms, but aluminum foil is by far the cheaper material.

Much of the time, people like to blackout their bedroom windows if they are particularly light sleepers that are sensitive to even a little bit of light in the morning. Alternatively, people that work night shifts that end up sleeping during the day blackout their bedrooms to fall asleep more easily. Either that or they are just wannabe vampires.

There is an argument that putting shiny aluminum over your windows will reflect sunlight and as a result will prevent your house from heating up.

Although the effectiveness of using aluminum foil to keep your living space cool is debatable, people cover windows with aluminum foil for this purpose, nonetheless.

Lastly, another reason why people like to aluminum foil on their windows is that they simply don’t want to be seen by the outside world.

It’s quite an effective way to hide away if that’s what you plan on doing. To each his own I suppose.

Common concerns about aluminum foil on windows (that you don’t need to worry about!) 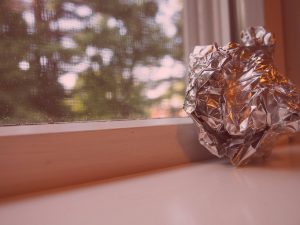 Despite the fact that aluminum foil over your windows is harmless, there are a few common yet impractical reasons why people think this approach is dangerous that should be addressed.

This is a common one. Some may be concerned that on one of those really hot summers days, the prolonged heat of the sun could possibly cause the tin foil to melt, sweat, or even catch on fire which could make a mess or damage your house.

Although the concern is understandable, it is practically impossible that this could happen. The melting temperature of aluminum foil is 660 degrees Celsius or 1,220 degrees Fahrenheit at standard pressure.1

Given that the hottest weather conditions ever recorded on earth have never even come close to even 200 degrees Fahrenheit, your foil on your windows won’t be melting any time soon. Unless you live on Mars, melting aluminum foil isn’t anything to be worried about.

“Heat could cause the foil to emit toxins!”

Another common concern is that heated up aluminum foil could possibly radiate toxins throughout your living space if you choose to cover your windows with it. However, this notion simply doesn’t hold water.

According to the Agency for Toxic Substances and Disease Registry2, Aluminum has proved to be an incredibly safe material to be exposed to in everyday life. The most common ways in which aluminum can potentially affect your health is if you constantly work in conditions where you are exposed to large amounts of aluminum dust, or by eating large amounts of aluminum. However, because aluminum doesn’t emit any sort of toxins that are harmful to humans, it’s perfectly safe to put up on windows.

“Aluminum foil on windows can attract lightning to hit my house!”

This is another concern that sounds like it could possibly be sensible… but it just isn’t.

Lightning is actually not attracted that much to relatively small metal objects such as window-sized tin foil rectangles as you might think.

Stormhighway.com3 claims that small metal objects are insignificant compared to the forces that generate lightning within thunderstorms. Lightning will strike below the storm where the opposite electrical charges of the lightning are the largest in the ground. This spot where the lightning can strike doesn’t need to be even close to a piece of metal.

In turn, tin foil covering your windows has extremely little to no influence in guiding where a lightning bolt will strike during a storm. 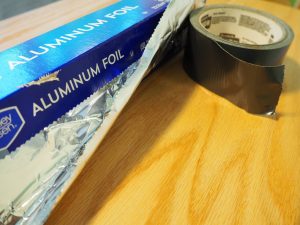 Although there are no legitimate safety concerns that come with covering windows with aluminum foil, there are still some reasons why you might not want to use this method nonetheless.

It can be distracting to people outside

Although aluminum foil windows won’t damage you, or your house, the shiny appearance of these windows can possibly be disruptive to others.

People trying to enjoy the outdoors on a hot summers day may not be particularly fond of the metallic reflection of your windows whenever they glance at your house.

For people driving or just walking by, this reflection could be particularly distracting.

Depending on how heavily wooded or distant from the street your house is, this might not be too much of an issue. However, if your house is right on the side of the street, close to other houses, and gets direct sunlight, this could be a concern.

Most people go about covering their windows with tin foil either to keep their house cool or to block out light to sleep better. However, not everyone on the outside might make the assumption that this is what you are trying to do.

Tin foil-covered windows can look a bit suspicious to some people. Some would infer that because you have a shiny barrier over your windows that you have set up a grow room or a drug lab in your room for instance.

For people that don’t know why someone would put up tin foil over their windows, they could, of course, have a host of other suspicions as well. Regardless, if you aren’t trying to raise any concerns among the neighbors it might be best to hold off on the tin foil

Beauty is in the eye of the beholder.

If you think that shiny windows look good, by all means, roll out your tin foil and go nuts. However, to most people tin foil covered windows don’t look too classy.

If your goal is to blackout some rooms in your house for better sleep, keep in mind that there are alternatives aside from tin foil that are relatively affordable. Blackout curtains or blackout film are examples of alternatives that don’t break the bank and look a bit more aesthetically pleasing.

If you are thinking about using aluminum foil on your windows for a cost-effective way to darken a room or to keep your house cool, there is no need to be concerned about safety.

Although there are a few reasons why you might not want to go through with this approach, none of the reasons are due to possible harm to yourself or your house.

How do I really know this you might ask?

Well, from personal experience for one. I have tried this approach multiple times, and yet I have never had a problem.

Additionally, after doing a bit of research on tin foil, and the possible ways in which it can harm you, it’s safe to say that the material poses little to no threat when it’s covering your windows.

To learn more about the ways in which you can darken your bedroom, check out this guide on how to blackout your bedroom. 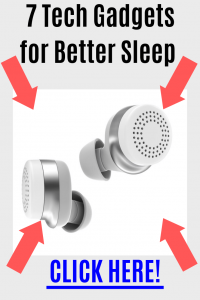